Earlier this term a group of year 8 girls were given the fantastic opportunity to take part in a virtual Girls in Tech day, facilitated by Albion in the Community. The day included listening to several inspiring women who had high profile and varied tech jobs at Amex. as well as designing and presenting an app to a panel of industry professionals.

The girls worked really hard throughout the day, listening attentively to the speakers from the AMEX and they were left hugely inspired. The female speakers from the Amex all had interesting and incredible job roles which were based in tech. They were clearly passionate about their roles and excited about the opportunities tech careers could offer, which was thought-provoking for the students involved.

Feeling inspired they were then asked to design an app and present to a panel of Amex app developers. Presenting virtually is not an easy task but, they did really well and received glowing feedback on their ideas.

The girls had a wonderful day and any of them were prompted to think about taking computer science as a GCSE.

I am now aware of all the opportunities available to women in the tech industry.

After completing Girls in Tech I’m now inspired to consider computing as a career, which I was not thinking about before.

Many thanks to Albion in the Community for organising such a fantastic day, we look forward to working with them again next year to continue inspiring the next generation of girls in tech. 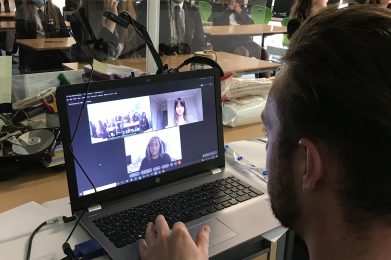